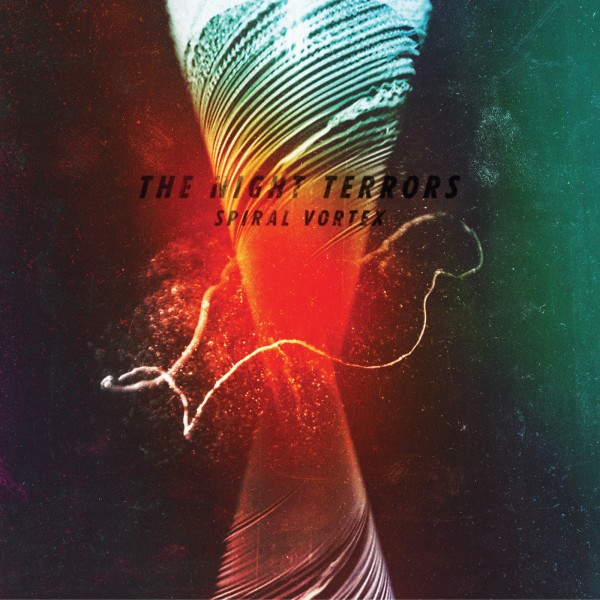 “Eagerly awaited new album of instrumental suspense film soundtracky synthscapes and spacey theremin laced prog from this Australian combo, for fans of Goblin, Zombi, Umberto, etc. On vinyl and the UK CD version is a double and includes their debut full length as well!”
Aquarius Records – Record of the Week 11.4.14

“The Night Terrors are an interesting band in that they manage to straddle the boundaries of tension, murky darkness, and garish monochrome lushness at the flick of a hand at a Theremin antenna. Miles Brown’s infatuation with the much-maligned instrument has gleaned some otherworldly and exciting results, none moreso than the band’s latest opus Spiral Vortex. It goes without saying that a band with a Theremin in it is going to be lumbered with horror score tropes – in fact this is heightened by the vintage synth that permeates each track. But this is never a bad thing, especially when you have such an intense skinsman as Damian Coward (Heirs) propelling things inexorably forward. It also makes sense why Spencer Hickman from famed horror soundtrack enthusiasts Death Waltz Records would be such a fervent fan.

I personally think Spiral Vortex is brilliant. It is the kind of late night spiral (it can’t be helped) into the black hole of feverish lament and Giallo deconstruction (and dismemberment). And the spectral cinematics are evidently something the band revels in – titles like ‘Lasers For Eyes’, ‘Monster’ and especially ‘The Devil Played Backwards’ serves to drive this heavy theme home. Brown’s utterly jaw dropping control of the Theremin notwithstanding, though, Spiral Vortex belongs to the synthesiser and its Master Controllers, Brown and Sarah Lim. There are artists out there on labels such as Not Not Fun or Dark Entries that take these sounds to dark and sensuous places, but never have I revelled in the deliciousness that borderline macabre cheese can bring. 70s/80s expressionism is subliminally evoked in every lush line that flows forth – Prince Of Darkness, Lifeforce, Phantasm, Suspiria, all of these movies that are schizophrenic and ridiculous and yet so seductive in their lurid imagery and use of colour. Spiral Vortex easily encompasses these elements – and at times easily surpasses them.”
Sonic Masala

“We got turned on to the synth-heavy, cinematic post-rock of this Aussie outfit last year, when their previous album Back To Zero was released on vinyl. Their secret weapon, a virtuoso theremin player, who coaxes all manner of weepy, wavery giallo-worthy ooohs and aaahs from that electronic instrument, its lovely, lachrymose vocal-like-timbre soaring over some seriously intense sci-fi zip-zap synth sounds and the massive momentum of the heavy, propulsive rhythm section. So powerful, and melodic! We’re excited that they’re now back with a brand new album, albeit with a stripped-down lineup: they’re just a duo now, not that you could tell, having shed a couple of synth players in the interim. Multi-instrumentalist Miles Brown, he who plays the theremin, as well synths, bass, and “noise”, takes up any and all slack, however. This sounds BIG.
When we reviewed Back To Zero, we noted that they had opened for Goblin, and that their own brand of soundtrack-y, Goblin-y horror movie prog sounded like it should have been released as an lp on the Death Waltz label. Perhaps you should just go read that review elsewhere on our site (’cause for one thing, the UK compact disc version of this new record is actually a double disc set, also including a reissued CD of that album as well), but we’ll quote ourselves a bit: “Sometimes gently atmospheric (someone mentioned Sigur Ros), sometimes noisy and distorted (someone mentioned MBV), always compelling and evocative, The Night Terrors almost seem specifically designed for aQ appreciation.” Indeed they do. We love this stuff! The new record has perhaps less of the gentle moments, devoting even more of its considerable energy to the crunching keyboards and math-rock rhythms. Tracks like “Monster” even hint at some form of adrenalized Euro-disco techno. Taken in sum, this almost approaches overload. Spiral Vortex is the perfect title; the sheer buzz and bombast of it all becomes quite headspinning. And demands to be played LOUD!! In a car, driving fast, even better. Makes us think of, like, if Emeralds got hopped up on Red Bull and challenged the Trans Am guys to a synthesizer drag race (whatever that means, but you know what we mean). This could be the soundtrack to all manner of suspenseful, futuristic action noir scenarios. Melody, majestic melody, is effectively employed throughout, not just on moodier cuts like “Celeste”. Always, the awesomely distorted, low-end tones from the synths and bass are perfectly balanced by the more ethereal, high-end “singing” of the theremin. Technically, though, this is mostly instrumental, but for some uber-distorted robot vox on the very last track, “Force Field”.
We mentioned Zombi in our other review – and basically these guys sound a lot like an over-the-top Zombi, if Clara Rockmore (you know, the famous classical thereminist) joined that band. Other obvious “recommended-if-you-like” references include: Umberto, The Oscillation, Maserati, Majeure, Nightsatan, and even the likes of Fuck Buttons and Black Moth Super Rainbow.”
Aquarius Records