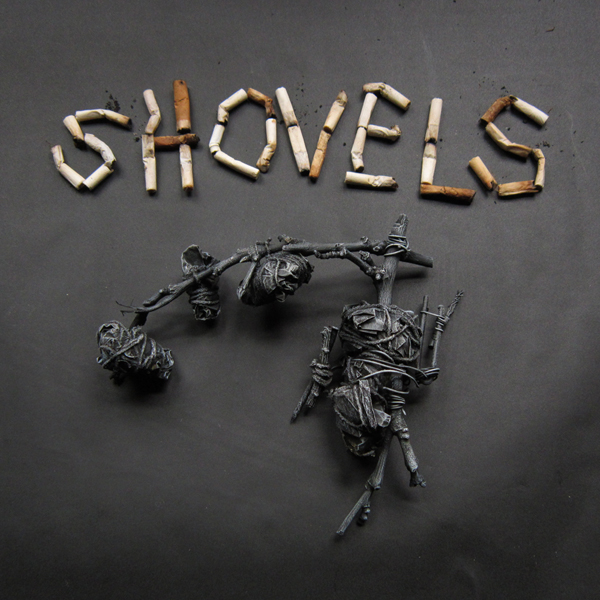 For fans of Lubricated Goat, A Frames, My Disco and feedtime.

“Shovels isn’t the greatest name for a band. It conveys a utilitarian image of work, a tool associated mainly with drudgery, unless it is the rare instance when one geezer bashes another geezer in the head and it’s “Exhibit A” in a murder case. Then it may conjure some genuine appeal.
So it is interesting why a band on a stellar label like Homeless would arrive at such a handle. Shovels are part post-punk, experimental and white noise-psych, as you listen more and more to this group, you realize that the members don’t need some trendy name that’s a forced misspelling of a commonly used word, or to be named after a forest critter’s sleep habits or body part to try and stand out like many of the hackneyed indie bands out there that have the staying power of a fruit fly. No, the members of Shovels, Michael Beach (guitar and vocals), Adam Camilleri (bass), and Peter Warden (drums) are alchemists, melding guttural voices and sonic blasts with tribal beats and galloping bass lines that nimbly shift gears into high and slow paces that leave your heart stuttering or racing in densely textured sound-scapes you want to visit again and again.
With outstanding tracks including “MB Jacket,” “Multiple Furrow,” and “Car Yards” amongst the other great ones (that at times remind you of Washington DC’s post-hardcore scene in the late 80’s that featured groundbreaking bands like Moss Icon), you realize that “Shovels” is more than just a name. It’s really a metaphor for this particular multi-layered composition that gets more rewarding the deeper you slowly dig past each heavy layer on a timeless journey to its inner core.”
The Styrofoam Drone

Shovels come charging out of the Homeless stable as a band in absolute peak condition. Their tight rhythms and challenging lyrics, soaked with brash overdriven guitar, provide a solid foundation for the band’s concise compositional skills.

This is a record that bursts through the white noise generated by ephemeral rock trendiness. It gallops with forward surging momentum and bristles with seductive tension. Shovels are masters of the art of knowing when to conspiratorially whisper and when to bludgeon with full force.

The eight tracks on this record tear through a spectrum of moods. Slow burning numbers such as Clyde, Arm Arm Leg and Expire play out like omens of tangible portent whilst MB Jacket, Multiple Farrow and Grenoble explode with energy, all channeled into a tightly focused beam.

Other tracks veer from trippy to pounding, all representative of a band who know the power they are capable of harnessing and go for it, nailing it every time.

Shovels are Michael Beach (guitar and vocals), Adam Camilleri (bass), and Peter Warden (drums). They formed in 2013 with members split between Melbourne, Australia and San Francisco, California. Their self-titled debut is presented proudly by Homeless Records. 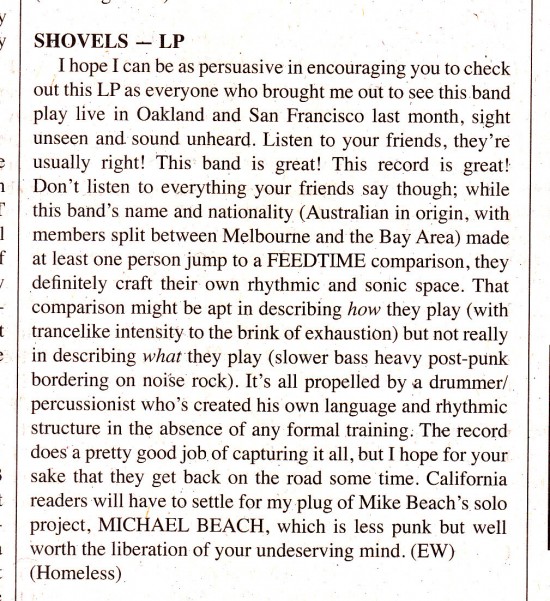 “I like a bit of psychedelic post-punk rock me. I don’t hear many Aussies doing this type of thing though. They’re normally more straight ahead face-fuck garage innit. Early Sonic Youth fans obviously, this self-titled loony-bin of a record starts off all relentless Action Beat meets early Gnod. A pummelling tribal, psychedelic flying mind-carpet treat that descends into stoned desert-rock drift before climbing out of the trippy hole and carrying on with its previously eager velocity.

Next up we have some cool, ragged A-Frames meets Ligament intensity. This is exactly how all bands should sound ever. I know that’s a fascistic thing to utter but I’m right and know several people what would back me up Guvnor. Now they’ve gone a bit Polvo meet Scratch Acid by way of Lungfish. It’s great this album regardless of them deciding it’s funny to form their band logo out of butt-ends. Scruffy little gruburchins.

Flipping over to savour further delights. Meaty Birthday Party bass props up a fairly post-rock-esque instrumental passage which has an intense cyclic introversion; it then explodes into motorik post-hardcore dynamics, ‘Clyde’ is ultimately reminiscent of recent Swans dynamics blended with the essence of the UK’s defunct brooding shouty shredders such as Bob Tilton and Fabric, from that there 90’s, back there. In the mists of time.

For fans of Lubricated Goat, A Frames, My Disco and feedtime