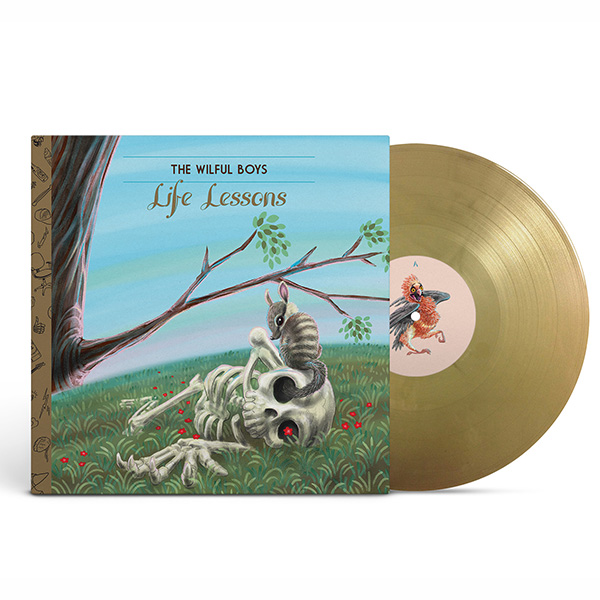 “…one mud-crusted boot in '70s hard rock and another in punk-splattered '90s noise-rock.” — Lars Gotrich (NPR)

“Rough As Guts, lives up to its name, with one mud-crusted boot in ’70s hard rock and another in punk-splattered ’90s noise-rock.” — Lars Gotrich (NPR)

“For the few mining the post-pig fuck sound of mid-’90s Amphetamine Reptile Records (and there are some), few make the brutal redux swing like this newbie Brooklyn bunch.” — Eric Davidson (CMJ)

The Wilful Boys take your good time seriously. They’re out on the street corner, preaching to the punks, drunks and metalheads, advocating the Tear Shit Up gospel; and the NYC-based band’s new album, Life Lessons, is a testament to their conviction.

Following up 2016’s acclaimed debut Rough As Guts, Life Lessons is being released worldwide by underground rock standard-bearer, Homeless Records, out of Australia. The connection to Australia comes not just from The Wilful Boys’ label, but also from their leader — singer and drummer Steven Fisher. It takes a certain constitution to “front” such a formidable band, but the hard-nosed Fisher is up to the task. His drumming is pure, hammering power and he hollers with a righteous, soulful fury. Fisher has a special knack for sounding like he’s blowing a gasket while winking knowingly at you — he includes you on the joke, even when it hurts to laugh. Driven by the twin guitar shredding of Johnny Provenzano and Nick Isles and propelled by Eric Lau’s bass-playing, The Wilful Boys are a ferocious live unit. This is intense music about life’s many frustrations, but that doesn’t mean the band are killjoys. In fact, a prime directive for The Wilful Boys is the simple act of cutting loose and cracking a smile, along with a case or two of beer. Like any great rock n’ roll unit, The Wilful Boys can blow off steam with the best of them. Such uncomplicated motives are practically revolutionary in today’s conflict-obsessed world.

Exploding out of the gate like a primed thoroughbred, “Head Check” shows how skillful The Wilful Boys are at walking the thin line between punk and metal. A raw-throated Fisher demands “Do I need a head check?”… looks like the answer is YES, and fortunately, Life Lessons provides all this and more. “Fully Pickled” traffics in steamroller riffs, piling them high up like scrap metal fit for the junkyard. Just as you are adjusting to the rock action bursting out of the speakers, “Bad Guy” settles into a groove that reveals the ambivalence at the heart of the song. It’s a neat trick. “Der Brain” is a blazingly fast old-fashioned ripper while “No Hat No Play” leans towards Fisher’s sardonic word-view as he shouts “It’s a beautiful day!”. “Both Ends” extends The Wilful Boys trademarked pummel into a moodier arrangement, accumulating an inexorable pull. “Back In The Game” is a pleasure in the form of punishment — enjoy those gnarly riffs as they cave your head in. On “Management,” Fisher deals with the daily grind and the impenetrable bureaucracy that lies behind our dealings with the higher-ups. “Summer’s Over” welds a power-pop sheen to the Wilful Boys’ Mad Max-like bulldozer, while a track like “Waiting” manages to find the lament within the bluster.

A hard-charging bruiser of an LP, Life Lessons’ potent brew of classic punk songwriting, hardcore energy and metal bashing prove that The Wilful Boys are a force to be reckoned with.

“..the noisier and angrier songs such as the title track and “Take It Easy” are delivered with a full pint of piss to the head , a kind of love that is a welcome surprise around here.” — RO (MRR)