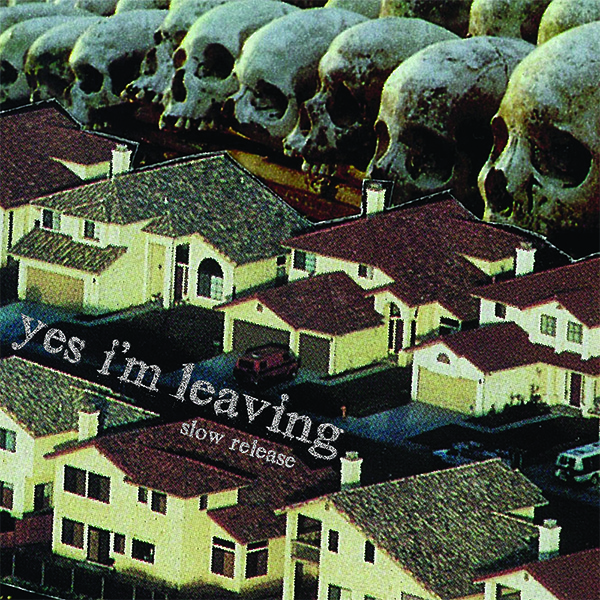 Yes I’m Leaving have been bubbling away in the suburbs for a few years, releasing three LP’s and perfecting an intense live show that is something akin to a sonic melting pot of Scratch Acid and Big Black. The band’s rhythm section, comprised of bassist David Cook and drummer Anthony Boyer, create a brutal steamroller that serves as the perfect platform to aid Billy Burke’s thrashing guitar and borderline tortured vocal delivery. Not since the days of Stu Spasm’s Lubricated Goat has Sydney seen such an intriguing mix of noise and menace.

“Sydney is a tangled mess. A cesspool that breeds frustration and a deep-rooted sense of self-hate and negativity. Professor Max Easton recently described the city as “a shotgun blast of confused city planning, a litigious wasteland, a city perpetually let down by its overlords and rendered self-sufficient by necessity”. The little ruffian has never been so correct. Over my thirty-odd years dwelling in this convict town I’ve witnessed countless proposed improvements that would genuinely increase the comfort level of the city’s population discarded as overly ambitious or too costly or slightly disruptive to a solitary segment. We’re dragged down into a martyrdom, defeatist existence, the same stance of the politicians and law-makers we despise. It’s someone else’s fault. It would never work in Sydney. We just love fighting against our habitat. Mission Bulb begins with an unaccompanied yelp. It’s not discomfort, anger or pain, it’s frustration. An unashamed complaint of human anguish. It’s the perfect introduction for the record, which embraces the idea of echoing it’s surrounds as a centrical theme. Like much the majority of the city’s population, vocalist Billy hides deep in the trenches, away from any tangible form of pristine. His gritted teeth of angst switches between long-distance delivery and grasping for air under a thick layer of fuzzy filth. The result is the same either way, often sounding strained, well past the point of legibility. The chosen delivery method is not a measure of significant, it’s just in this town people don’t care for your opinion. It hardly matters how hoarse your voice becomes, effort doesn’t equate to action or change. Your complaints will rarely be heard over the overpowering daily mechanics that churn on with a continual and painful groan. The lyrics are consistently dwarfed by the surrounding grunge-fueled compositions. Sordid and over-sized, akin to the wide-open industrial estates which fill the gaps between the tranquilly soulless, evenly-allotted housing developments of the far-western suburbs and the unplanned make-do existence of Sydney’s inner-city. Riffs violently interject in an attempt to make a point, loudly colliding over the top with the more consistent rhythms. Guitars dominate. Muddling and rushing through their formations, creating the crux of the record’s impulsiveness. Most songs are presented as skeleton structures, stomping out the obviously hollowed signs of fragility with a bolstered front-foot aggression. After all, confidence is the king of our confused settlement. This attacking method melts into a violent discord, with the consistent forthrightness often overflowing, causing the music itself to unceremoniously implode into a heap, relying on a plainspoken solitary lyric to retain some sense of order. But it’s mostly just a fucking mess. A beautiful fucking mess. It churns on through it’s own missteps, ignores it’s shortcomings, it’s unplanned shifts and turns. Even when it seems to be building to a logical sense of control, it interjects with a chaotic vehement of life (Creepyman). It’s a record that’s both tauntingly self-confident (You Can Try) and self-depreciatingly unsure of itself (Undertow). Confused, but comfortable and completely aware of the surrounding disorder. Best of all, these despairing moments are never celebrated or showcased for a second longer than required. It doesn’t attach itself to it’s anguish, but merely presents it in a perfectly unfiltered state. Yes I’m Leaving are masters of this unsettling directness, for both dictating a clearly defined purpose (Song For You) and also as an arms-length separation. “People turn their heads when I pass”, Billy bluntly states mid-song, hardly highlighting the line with the significance it deserves. Accompanying this lyrical absoluteness, there’s an uninvited snarl, an elongated, drawled sentence or a belittling one-line punch. Always a tactic at the ready to distinguish any measurable element of comfort. While some bands invite outsiders in to share their experience, Yes I’m Leaving push back, relegating us to the role of uninvolved witness. The perfect perspective to take in the entire picture, a diagram of bitterness and uneasiness that stretches out well past any logically defined borders. While, surely an unintentional result (and more than likely only interpreted as such by the author of this review), Yes I’m Leaving have created a record that affectionally defines it’s environmental context. It’s the ugly truth. The real Sydney that I lovingly admire. A city that exists — and survives — mostly undocumented, somewhere well beyond the propped-up, fake beauty that we present to the outside world. This album is a reflection of the uncertainty of city’s residents, their insecurities, and, above all, their habitual anxiety. Mission Bulb is a confusingly conflicting mess, a complex balance of celebration and resentment, apathy and emotion, confidence and indecisiveness, frankness and unhinged disarray, immediacy and chaos. All characteristics I love and hate of this city, that grinds through a single day at a time, unsure of it’s next move, yet staunchly starring down it’s future.” Polaroids of Androids